I am finally on the grand adventure of making sake.  Before you can get into the fermentation process you need to prepare the koji.  Koji is the enzyme that does the work of breaking down the rice (similar to the enzymes that break down malt during saccryfication).  In the case of sake, though, it is a mold spore that does the work.

The process itself is fairly easy, but it can be a bit time consuming.  I have spent the better part of today doing the various steps preparing the rice for this process.  And now that this step is done I will have to ensure the temperature stays relatively constant for the next two days as the spores convert the rice of the starter.  This will include twice a day mixings of the koji (every 12 hours) to ensure even growth. 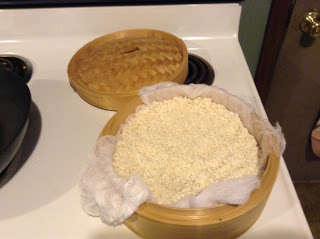 I started out with 3 cups of rice that I then washed till it ran clear.  From there I did a 7 hour soak (this was because it was dinner rice instead of sake rice.  Sake rice needs only soak for about an hour).  The nice thing is, you can do other things while this is going on.  After the soak, I allowed the rice to drain in a strainer for about an hour. 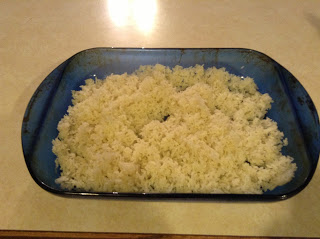 The soak and drain are important to remove excess starches.  When the rice is steamed you want it to be firm and not excessively sticky.  I steamed the rice for about 40 minutes.  The individual grains were firm but cooked.  This will give the koji spores structure. 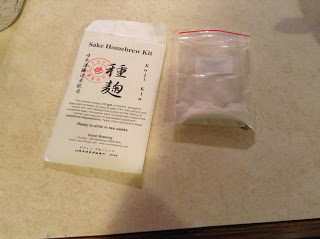 From here I cooled the rice in the pan it would be converting in.  At roughly 85 degrees, it was time to add the spores.   This was done in stages.  Sprinkle the powder and mix then repeat until it was all evenly incorporated.  Something I noticed, the rice by itself was a bit sticky.  As the koji spores were worked in, the rice loosened up making it easier to mix. 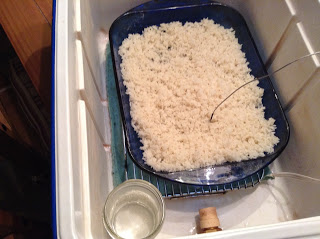 Once everything was mixed, it was time for the final step.  While the rice was steaming I prepared my mash tun by preheating it.  It was then little more than a quick wipe out and setting in the heating pad (to ensure good temps) and a trivet to keep the rice pan off the direct heat.  A glass of water was added to keep the humidity constant (also a damp towl over the rice helps too).

There is a thermometer inserted directly into the rice to monitor the internal temps.  Incubation is a delicate process that you want to insure happens to set guidelines.

This will now be my rice’s home for the next couple days.  Next week the process of making the sake will commence.

I want to thank the Mad Fermentationist for his work in 2010.  His write up is where I figured out the way I would set up my incubation chamber.